Blog
You are here: Home1 / Episode #19: Captivating People: The Power of Personality and Psychographic...

Episode #19: Captivating People: The Power of Personality and Psychographic Profiles in Politics with Merrick Rosenberg

In this episode, Rusha interviews Merrick Rosenberg, who discusses the new media landscape and how we all interact wit each other. Merrick discusses the four styles of communication, which are the: Eagle, Dove, Owl, and Parrot. He explains that these styles play out in all aspects of our lives, including our relationships, work, and presidential elections. Merrick goes on to say that this framework is intuitive and similar to the Apgar score used to assess a child’s health. He discusses further the importance of having a good team and how they can help you achieve your goals.

Merrick discusses the strengths and weaknesses of each communication style

The Eagle is a strategic thinker and confident

The Dove want people to be happy and get along

The Owl are analytical and detail-oriented while being relatively quiet

The Parrot like to be around others and are very vocal

The gender element of the distribution across industries for personality types

Men are perceived as Assertive

Women are perceived as Aggressive

The progress towards gender equality

Merrick discusses how the personality of a presidential candidate

Owls are more policy experts while Eagles are more salespeople

The difference is seen in different countries around the world

Personality biases plays out in elections

The dysfunction in the US political system due to angry personalities

Each style has its own strengths and weaknesses

Merrick identifies this type as the Chameleon

He can flex all four styles at the exact right time

Bill Clinton is an example of a Chameleon

Merrick discusses how Bill Clinton is a master in public speaking

Merrick discusses the importance of being an effective leader

How to connect with Merrick Rosenberg at https://merrickrosenberg.com/

What are you waiting for? Head to Alchemy of Politics; join the conversation and start a change reaction! Follow us on Instagram and Tik Tok.

Merrick Rosenberg – “The Chameleon can display all four of them, not just the task oriented skills of being direct and making good quality decisions or the people who are in it skills of, we care about our people that’s created engaging environment where people are happy. The most successful leaders can do both of those because they can flex to all four styles at the exact right time at the right time and at the exact right moment.”

Rusha Modi – “I think that leadership is hard to describe almost elusive trait that people have, and it seems like everyone is trying to sort of pin it down. But I don’t know, aside from a couple of people such as yourself, that someone really understands that it seems to be that leadership is really about how you relate to people.”

If You Enjoyed this Episode, Please Check Out. 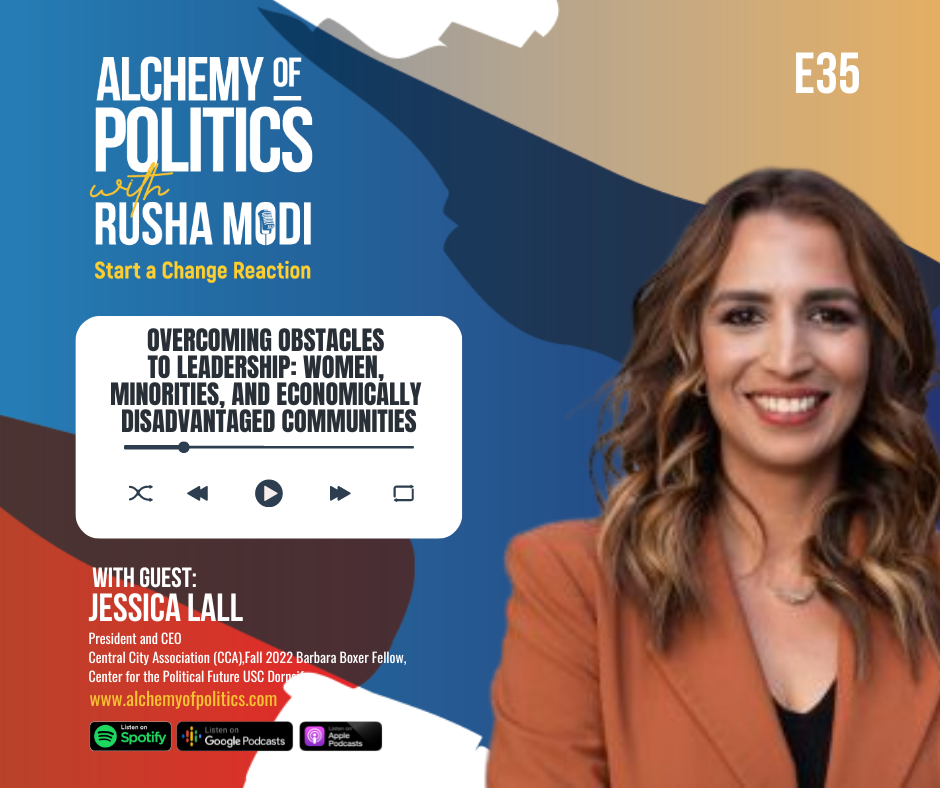 Jessica Lall on the LA Mayoral Race of the City of Angels, City of Leaders, She […]

Did you enjoy this podcast?
Please leave a review on

Stitcher
Episode #18: Sending The Elevator Down: Expanding The Healthcare Workforce To...

Episode #19: Captivating People: The Power of Personality and Psychographic Profiles in Politics with Merrick Rosenberg
-